Equipment Supplied For The Project:

This regional jail was completed in the summer of 2014, and is a new facility that will serve the counties of Warren, Rappahannock, and Shenandoah areas. The Lochinvar Armor condensing water heaters and storage tanks will be used as two separate systems servicing the laundry and kitchen needs. This will allow the facility to store two different set temperatures in each tank for their respective system needs. The facility was also supplied with a 504 gallon Lochinvar hot water buffer tank, this will increase the water volume in the system and it will also eliminate the chance of short-cycling the boilers. 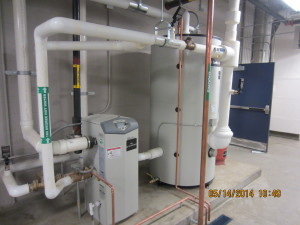